Fresh Tickets: The Coolest Way to Avoid the Airlines 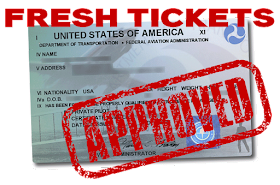 In part one of this series, we met Michael Medley, a young English pilot who just earned his EASA PPL and FAA Private Pilot's tickets simultaneously. Medley is currently acquiring the hours and ratings on his way to fly for the airlines, while the freshly-minted pilot we are profiling in today's article, yacht Captain Roy Hodges of Palm Beach, Florida, wants to use his new pilot's license to avoid the airlines.

"I decided to get my license after a bad experience with the airlines," Hodges, says. "My wife and I own a house in the Bahamas that we don't get to frequent as much as we wish. One time, we had only 48 hours to travel to and spend at our home. We were flying commercial and spent 12 hours at the airport in Miami on a delay. I decided that if I could fly myself, we would have more control over our own schedule and flexibility. With my new pilot's license, we are able to enjoy more leisure time for ourselves and not be at the mercy of the commercial airline schedule."

While there are always plenty of new things to learn about flying an airplane, it is quite well known that there is a fair amount of crossover between operating an airplane and being in command of a large ocean-going vessel. Pilots-in-Command of airplanes and Captains of yachts measure distance in "nautical miles", and navigate by heading, course and track. They both make corrections for crosswinds to stay our course, both use advance electronics in their panel, and when those electronics go offline, both must rely on complicated charts to navigate through complex airspace or waterways.

It is possibly because of Hodges' career as a Yacht Captain that his flight training at Sarasota's Cirrus Aviation was completed in just 60 hours spread over three months at a cost of around $10,000. When you have the ability to safely guide large, ridiculously expensive vessels around the often angry seas, picking up the additional skills to navigate the same way through the air is not so much of a stretch:


"I grew up on Kentucky Lake and Lake Barkley working at Green Turtle Bay Marina and Houseboat Rentals from the age of 13," Hodges explains, "and had acquired enough sea time to get my Captain’s License at 19 years old. For the past 16 years, I've been been spending most of his time in the Bahamas and the Eastern Caribbean where I currently Captain a 150-foot, privately-owned luxury motor yacht with a crew of nine. I hold a United States Coast Guard 1,600-Ton Oceans License/3,000-Ton ITC and 500-Ton Master from the Marshall Islands."

Even though Hodges can probably thread a $15MIL MegaYacht between two coral reefs while blindfolded, he had to overcome some of the same challenges that every private pilot student sees. "I did home study for the written test," he says, "that gave me more flexibility with my study time and saved some money. But I struggled with landings, and had to get past a period during training where landings seemed to get more difficult instead of easier. So I went out and did 25 touch and goes in one day and finally it just clicked. I also learned on my check ride that the Examiner won't fail you for looking at the checklist too often!"

With a new pilot's license in hand, Hodges says being a licensed pilot feels awesome:


"Knowing that I can go out and jump in the plane and go--it's very liberating! The best feeling was after the first solo...it feels like getting your drivers license when you're 16! There are many benefits to flying a private plane, including taking several friends and family members up with me. Once they experience it, they are hooked! It also makes traveling with our dog much easier than with the airlines. And I am now looking at airplanes to buy, there are a few good deals on planes out there, but I'm just waiting on the right situation to make a purchase," Hodges said.

As I think about the many paths Hodges can choose to earn advanced ratings and additional licenses, one particular use of an "add-on" license comes to mind. If he were to earn his helicopter license, he might make himself into the most "in demand" and desirable Yacht Captain anywhere.

It would be a magnificant sight to see him inch a gazillion-dollar vessel into a pristine cove off some tropical Caribbean island, drop anchor and then fire up the ship's rotorcraft. Yes, of course, all MegaYachts have their own helicopter, don't they? Most likely it would be a cute little AS350 AStar perched precariously on the tiny helipad just above the quarterdeck and astern of the Promenade Deck.

That description sounds so much more "nautical" than just telling you the chopper is hanging off the back of the boat.
Dan Pimentel at 12:59 PM
Share
‹
›
Home
View web version