Busting Common GA Myths: Plenty of Work to Do, But the Odds Are in Our Favor 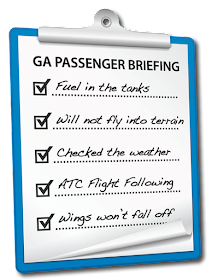 If you're a licensed pilot, or hang around within the aviation family long enough, you're bound to meet a few people who are absolutely freaked out to climb inside our single-engine general aviation airplanes and blast off through the sky in search of adventure and wildly expensive hamburgers.

I will soon present my findings from a recent survey Airplanista conducted on the topic. My intuition tells me that in many of these situations where someone is frightened about jumping inside our wonderful flying machines, a lack of understanding may be to blame. But with the right coaching, we in the aviation community can educate the public and maybe change some of these minds. If GA is to ever grow enough to pull out of the flat spin it has experienced since 2007, we first need to address a lack of public knowledge about our airplanes and their complex systems, about our training, and about the airspace we fly in.

Let's first look at what the Federal Aviation Administration has to say about GA safety. In their Fact Sheet from 19 June, 2012, the FAA said:


"The United States has the largest and most diverse general aviation community in the world, with more than 300,000 aircraft including amateur-built aircraft, rotorcraft, balloons, and highly sophisticated turbojets. “Loss of Control” continues to be the leading cause accounting for about 70 percent of all fatal GA accidents. Approximately 80 percent of fatal accidents are directly related to human factors."

When we analyze that pull quote, a few important findings jump off the page. First, only 20 percent of GA fatalities are related to non-human – or mechanical – problems. So while it is clear pilot error is still a concern going forward in this series, this statistic will come in handy later on when we talk about the certification and annual inspections of our GA airplanes, and how they are built with dependable, redundant systems.

When "loss of control" is the leading cause of fatalities, followed closely by "Controlled Flight Into Terrain," it means we have a tough job ahead explaining away these pilot error-caused accidents to fearful potential passengers. We may be able to make a great case for getting in the airplane, but what it really comes down to is that a fearful passenger puts their life in the hands of another, in this case, a "trained" pilot.

On the surface, this act of allowing another human to literally control your immediate destiny is not at all dissimilar to riding in someone else's car. The point we will make later in this series is that if you carpool to work, you're at risk every day as a helpless passenger flying in close formation at 75 mph down a packed interstate. With maniacs on the left and aggressive drivers hopped up on road rage on the right, your life relies on your carpool pilot's skill set behind the wheel. With each mile, evading drunk drivers or a rogue, asleep-at-the-wheel trucker hauling 40,000 lbs. of bananas to Hunt's Point becomes an exercise in defensive driving that if done well, will keep everyone in the Buick alive long enough to make the exit.

As we begin to convince the fearful public about joining us in the sky, we must first offer this bit of good news, again from the FAA GA Safety Fact Sheet:


"While the number of fatal general aviation accidents over the last decade has gone down, so have the flight hours due to economic factors. Over the past three years, fatal accidents from Controlled Flight Into Terrain (CFIT) have been reduced by more than 50 percent compared to the previous three years. Those involving “Loss of Control” in flight and during approach and landing are down 20 to 25 percent. Meanwhile, fatal accidents in weather have decreased by nearly 40 percent in the past three years, and those that occur at night are down by about 25 percent."

That is great progress, even if overall flight hours are down. When you consider that general aviation fatal accident rate for 2011 was just 1.13 fatal accidents per 100,000 hours flown, you can honestly say to your fearful potential pax that they'll enjoy spectacular odds of surviving a flight with you. The decreases cited above from FAA demonstrate promising upward trends, and technology may be a contributing factor. Because of onboard synthetic vision and advancements in glass cockpits and GPS functionality, more pilots have the ability to see the terrain before flying straight into it.

Likewise, you can tell your passengers that the 40 percent decrease in WX-related accidents is due to vast advancements in technology readily available to pilots. Most notably, having apps like Foreflight and AOPA FlyQ delivering graphics and WX briefings to your kneeboard in ways that would have been considered magic just a few decades ago raises weather situational awareness to higher levels resulting in improved safety.
As we begin this discussion, we must become very familiar with the following info from FAA:

We've already talked briefly about the first two causes on this list, but let's examine the rest of the data. What immediately jumps out at me is #4, low altitude operations. It should be easy to tell your passengers you will be doing no "buzzing" and they can scratch that one off their list of fears. There is a big gray area in #5 and #6, so you're on your own there. But #7 is a no-brainer, just let them look inside the full tanks to see that you have lots of fuel aboard. Explain your GPH fuel burn, discuss range and your fuel requirements for this particular flight. Cause #9 is handled because you WILL be on ATC Flight Following on this trip into the sky, and to explain away #10, shown them the map portion of Foreflight and have a conversation about the NEXRAD returns you see (or don't see), and talk about how your planned routing takes you around any weather.

Now as far as #3 and #8 go, we just need to our give them a clear understanding of our equipment, our airplanes and their systems.

With a little cooperation from my aviation family, we can get a few of these fearful people out to the airport. Once there, we can gently nudge them into the front seat where they can take a nice scenic flight and watch us control the airplane up close. With a little education and some smart stagecraft, who knows, we might put those fears so far out of their consciousness that they might even like the flight.